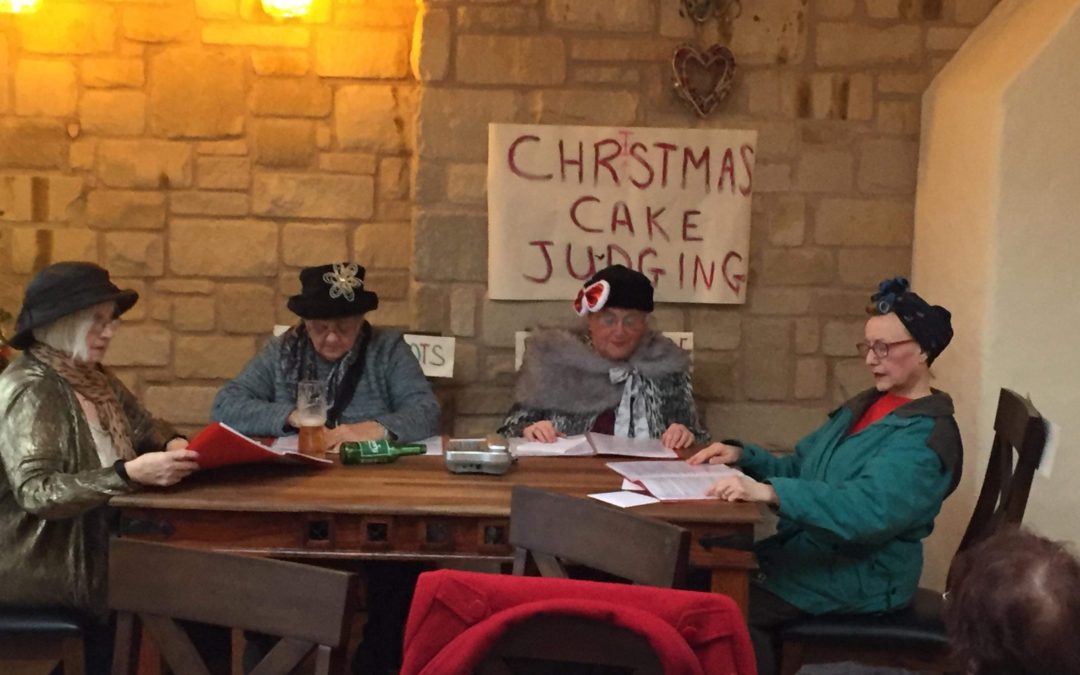 Norham WI – Ladies in line for BAFTA
Members of Norham WI were highly entertained at their Christmas meeting by four members acting out a comedy sketch about judging a cake competition. The sketch was penned by the President’s daughter, Jillian, and the husband of one lady was also persuaded to appear in a cameo role as a Vicar. It was a brilliant production and the actors definitely deserve BAFTAS for their performances and comedic timing. This was followed by a delicious afternoon tea.

Whey Aye – get all wrapped up!
At their November meeting, Whey Aye WI had a great demo on Christmas wrapping from Marj (pictured with Whey Aye WI member Karen Collins).
A great time was had by all…

West Moor Wonders – Show the Love
At their January meeting, the ladies painted rocks with green hearts on one side and a green message on the reverse. These will be placed in the West Moor and wider community from 5 February, for residents to find. It is intended that they will generated conversations about climate change. A special rock will bear a message that by texting a number, the first finder will receive a prize. There will be publicity sent out concerning these plans from the start of the Show The Love period.

Congratulations to Nedderton and Bedlington
Mrs Amelia (Millie) Wilson, cut the celebration cake at Nedderton and Bedlington WI’s 90th birthday party on 5 November 2019.
Everyone had a beautiful afternoon tea at Shotton Grange, Blagdon followed by an excellent singer then a raffle and auction. A most enjoyable day was had by all our members and guests.

An update from Warkworth WI
Kate Burnham gives an update on the project to make re-usable washable sanitary pads for a Masai village in Kenya.
The re-usable sanitary pads will be taken to Kenya by Jane Bell, a friend of one of our members. There has been much interest shown following the letter in WI Life. Stannington WI produced many pads and wash bags and handed them over to Jane. There have also been enquiries from Earsdon and Wellfield WI in our Federation and from further afield; Pattishall WI, Northamptonshire, East Dulwich, London, Bromley Cross, Lancashire and Mitchelldean in the Forest of Dean, Gloucestershire.

We are so pleased that others share our view that this is a worthwhile way to help women and girls. Jane Bell is thrilled with the response and has been able to enlist the help of other charities to help deliver them to impoverished areas. There is a link on our website for patterns and other information at: www.warkworthwi.wordpress.com

Bygate WI get down to earth
The September speaker at Bygate was Duika Burgess Watson. She spoke about the Whitley Bay community garden, Station master’s garden and then went on to talk about her work at Green Beans market with a chef to help people with a compromised palate due to chemo, Parkinson’s etc. She lectures in nutrition at Northumbria University. It was a well-received talk and Duika is happy to talk to bigger audiences. You can contact her at stationmastersgarden@gmail.com